Eti begum, a single parent and an entrepreneur, is an aspiring woman who refused to surrender to the obstacles that life threw at her. She reversed her life direction which society was dragging her into and decided to lead her life her way!

Eti Begum of Mathurapur village under Rahimanpur Union, Thakurgaon district Sadar created an inconvertible example to achieve triumph in life amidst of all the adversities. Today she is a very successful Nobin Udyokta. In recognition of her success, she was also awarded the best Nobin Udyokta of GTT in 2016.


Eti’s father passed away when she was not even born. Her mother faced many difficulties with her six children right after the demise of her father. Her grandmother came forward to aid. With the help of her grandmother and elder brother, Eti was able to pass her Secondary School Certificate (SSC) exam but she she could not continue her studies after SSC as she was married at an early age.


Like most girls in the rural areas of Bangladesh, Eti was also an example of early marriage and,she also became mother of a daughter at a young age. Soon after, misfortune once again hit Ms. Eti. Due to various family problems with her inalws and husband, she was forced to come back to her mother’s home with her daughter. After a number of unsuccessful attempts to return to her husband’s home, she had to get a divorce.


Divorce is still a denounced practice in the rural areas of Bangladesh. Nevertheless, she reclaimed her choice to lead her life her way. She moved into her mother’s house with her daughter, pursued her own education and also took a leap of fate into entrepreneurship.


At the time of her separation Ms. Eti only had a goat with two kids. She got those back from her former husband’s place that she brought up there. In spite of the adverse situation she pursued her college education to study once again. She was reluctant to take help from others, so she bought a sewing machine with the earnings from goat rearing. She also started poultry rearing. She would meet her educational expenses with the earnings from tailoring clothes, goat and poultry rearing.


Eti proudly claims, “I have never asked for money for education to anyone after passing the SSC exam. I have studied with my own money.”


While working in elder brother’s house, the idea to earn and live a respectable life crossed her mind. From that idea, she bought a local breed dairy cow with the 7 thousand taka that she earned from sewing in 2008. She would get 50-60 takas daily selling milk. It encouraged her. She planned to buy a good high breed cow. Unfortunately, this time she had no money to buy the cow and then her mother stood beside her. Taking a loan of 20 thousand taka from Grameen Bank, she gave it to Eti. Eti sold her local breed cow for 20 thousand taka, then she added 10 thousand taka from her earnings from sewing. With total 50 thousand taka she bought a foreign breed cow. It boosted her daily income. She also did not stop her sewing work.


Eti engaged herself into hard work and she successfully managed to save some gold jewelries and cash with her own hard earned income. To speak about the hard work,  Eti Begum says-


“I not only want to financially establish myself, I also want to highly educate myself. I want earn a respectable place in the society”.


Eti always encouraged her daughter to be highly educated and spend 1500 taka every month for her higher education. She used to dream to be financially established and creating a big dairy farm, but she was not sure how to shape her dream in reality.


At that time, she came to know about the Nobin Udyokta program of GTT through Grameen Krishi Foundation and she took decision to take investment after learning vividly about this. Afterwards, in 20014 in the design lab presided by Prof. Muhammad Yunus, her ‘Julakha Dairy Farm’ project was appreciated and approved an investment of 1,75, 000 taka from GTT.


Now she has three cows, two calves and five goats. She does not want to confine her entrepreneur skills to just dairy farm only and hence she also provides training on sewing to the local women in her locality. She has created employment opportunities for three (3) more people thus carrying the true essence of the Nobin Udyokta (NU) program; “We are not job seekers but job givers”.


Eti Begum is now a graduation final year student and a diary farm owner which she is running successfully for the past five years. She wants to pursue law for her further studies so that she can help the oppressed women in the society. She has a vision to supply quality dairy products, create more employment opportunities and take her business to a new height with a goal of building a factory to produce butter, yogurt and ghee.

Nobin Udyokta-NU (New Entrepreneur) Program is a youth-entrepreneurship development program for the next generation of Grameen family to turn unemployment into entrepreneurship. 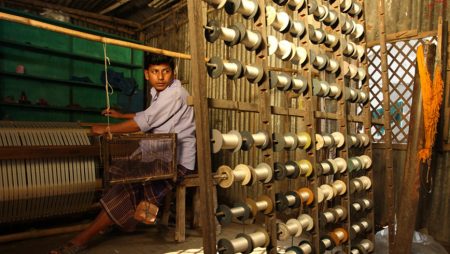